Signals are used to keep multiple trains on the same rail network from colliding. In Voxel Tycoon there are two signal types, the regular signal (also called block signal, normal signal, or just signal) and pre-signal (also called chain signal). Both signal types separate the track into blocks, in which only one train is allowed at a time, except when trains ignoring signals or construction causes multiple trains to be in the same block.

Trains can only pass signals if there is a signal facing them. Placing a signal on one side of the track will make the track one-way. Placing signals on both sides will make it two-way. 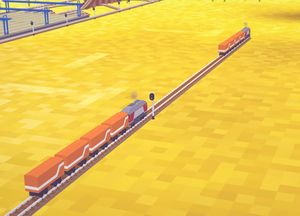 Basic usage of a regular signal

A train will pass a regular signal if the block after the signal is free. 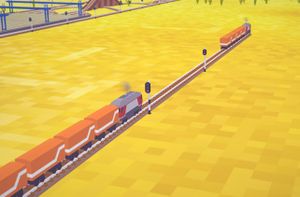 Basic usage of a pre-signal.

Pre-signal keeping an intersection clear. The bottom train will be able to pass through the intersection with the help of the pre-signal on the right track.

A train will pass a pre-signal if every block in the train's desired path up to and including the next regular signal is free. This is usually used for keeping intersections free and distributing trains among platforms.

The pre-signal will be green if all possible paths are free, yellow if there is at least one blocked and at least one open, and red if all paths are blocked. If a train does not need to pass completely through a sequence of pre-signals (i.e. when it wants to go to a station in the middle), but there is no eventual exit after the train's path, the train will not go through.

Trains can pass an initial pre-signal, only to be blocked at another pre-signal by another train. If this train needed to pass a pre-signal to enter the offending block, then it must be able to leave the block, thus freeing the original train. This way, the pre-signal grouping cannot be blocked forever as long as there is enough space after the exiting regular signals to fit each train.